After a near fatal accident on the half-pipe, Damian Dorante recovers at the bed-and-breakfast of his best friend’s family.

Damian welcomes the warmth of the Mills family after his falling out with his father. There’s only one person he wished to avoid at the B&B but unfortunately can’t escape from; the gorgeous Chloe Mills.

His best friend’s sister starred his dreams months before the accident, but Damian had everything under control. Until now. Chloe comes into his room every day to fluff his pillow and talk about her day. Her sweetness is nothing but torture.

Damian doesn’t want to betray his best friend Adam. But how long can he resist this insane attraction to the one person who could get inside his protective walls surrounding him?

Fall in love with the Winter Peaks big family romance families and see why thousands of readers have started binge reading the sassily strong and luscious alpha characters in Anna Castor’s series. All Winter Peaks books can be enjoyed as stand-alone novels or as part of the larger series.

Damian is a laugh out loud sexy and heartfelt big family romance that will have you root for Chloe and Damian’s happily ever after. Filled with hilarious family banter between brothers and sisters this romance series will make you feel part of their families. 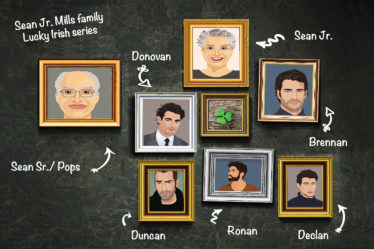